Home > The 26th Rifle, Reenacted > Women In The Red Army

Women In The Red Army

“In the history of war, woman has played patriot, killer, and savior. The most controversial role woman has played throughout history in war is that of warrior.”
– Anna Yegorova, Hero of the Soviet Union, in Red Sky Black Death. 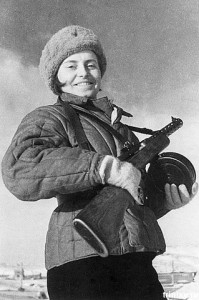 Though there is no exact number, an estimated 1,000,000 women served in the Soviet armed forces during the Great Patriotic War (Yegorova 112). Of those, 120,000 were artillery, machine gunners, mortar gunners, snipers, and infantrymen. Women served in almost every facet of war that men did, they were fighters, bombers, armorers, nurses, combat medics, tankers, and you name it; women were capable (Clements 240). In 1941, women flooded volunteer offices; but their military potential was not fully recognized until the following year when tens of thousands were finally mobilized either by volunteers or conscripts (Berkhoff 53). “No” was rarely taken as an answer. The Soviet public was never made fully aware to what scale women were serving on, as censors were not allowed to report on women soldiers unless proclaiming them heroes (Berkhoff 53). 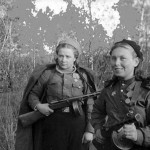 At first, the gender integration into military units wasn’t easy on women, or men. Men had a hard time leaving traditional thinking towards women behind, and women had a hard time adapting to the lack of feminine accommodations for them (Braithwaite 114). Commander of the Moscow forces, D.A. Zhravlev, believed that women were the weak sex and could not be effective when placed in the formerly “boys club” world of war, he doubted that women (who were always referred to as ‘girls’) would be able to cope with the reality of war (Attwood 137). Men even believed that women brought bad luck (Clements 2 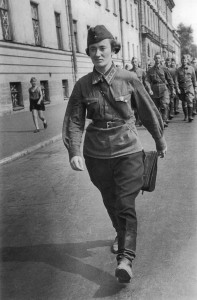 43). The disdain and confusion quickly closed as women further proved themselves in and behind the lines. In order to make-due with the lack of latrines, women often fell out of formations to take care of their business (Clements 243). They shared tiny scraps of soap, washed with moss, and they usually maintained short curled haircuts. Make-up was a rarity, and was worn very lightly if it was obtained; it was mostly reserved for parades (Merridale 165).

Female combat soldiers bore the same uniform as their male counterparts, and due to this they felt a strain on their femininity (Yegorova 1). Women weren’t sure whether to regard themselves as masculine women or feminine soldiers. In order to calm the confusion, the warrior woman painted herself as just that – a female warrior (Attwood 137). She stuck flowers in her tunic, the bayonet of her rifle, decorated her tent, painted flowers on her plane, and wore pretty scarves that they brought with them from home (Clements 241-243).